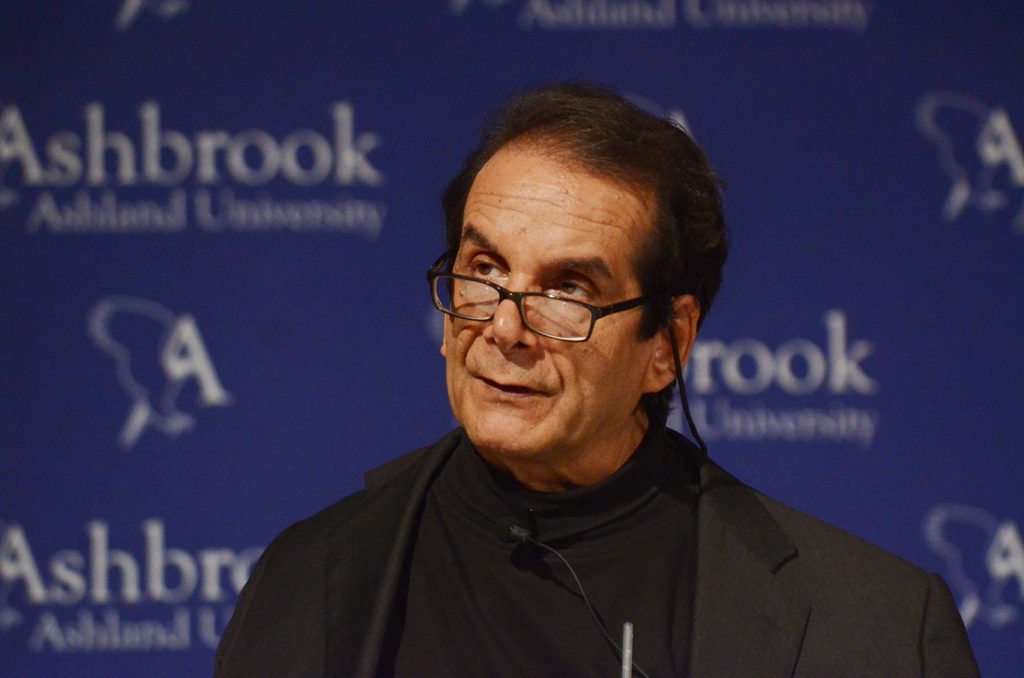 Winner of the Pulitzer Prize and named by The Financial Times as the most influential commentator
in America, Charles Krauthammer has been honored from every part of the political spectrum for his
bold and original writing—from the famously liberal People for the American Way (which presented
him their First Amendment Award) to the staunchly conservative Bradley Foundation (which awarded
him their first $250,000 Bradley Prize).

Since 1985, Krauthammer has written a syndicated column for The Washington Post for which he
won the 1987 Pulitzer Prize for distinguished commentary. It is published weekly in more than 290
newspapers worldwide.

Krauthammer is a contributing editor to The Weekly Standard and The New Republic, and a weekly
panelist on Inside Washington. He is also a contributor to FOX News, appearing nightly on FOX’s
evening news program, Special Report with Bret Baier.

For three decades, his influential writings have helped frame the very shape of American foreign
policy. He coined and developed The Reagan Doctrine (TIME, April 1985), defined the structure of
the post-Cold War world in The Unipolar Moment (Foreign Affairs, Winter 1990/1991) and outlined
the principles of post-9/11 American foreign policy in his much-debated Irving Kristol Lecture, Democratic Realism (AEI Press, March 2004).

MSNBC’s Joe Scarborough calls him “without a doubt, the most powerful force in American conservatism.” National Review featured him on its cover as “Obama’s critic-in-chief.” Der Spiegel calls him “the leading voice of America’s conservative intellectuals.” New York Times columnist David Brooks says that today “he’s the most important conservative columnist.”

Born in New York City and raised in Montreal, Krauthammer was educated at McGill University (B.A.
1970), Oxford University (Commonwealth Scholar in Politics) and Harvard (M.D. 1975). While
serving as a resident and then chief resident in psychiatry at Massachusetts General Hospital, he
published several scientific papers, including the discovery of a form of bipolar disease, that continues
to be cited in the psychiatric literature.

In 1978, he quit medical practice, came to Washington to help direct planning in psychiatric research
in the Carter administration, and began contributing articles to The New Republic. In 1980, he served
as a speechwriter to Vice President Walter Mondale. He joined The New Republic as a writer and
editor in 1981. His New Republic writings won the 1984 National Magazine Award for Essays and
Criticism, the highest award in magazine journalism.

From 2001 to 2006, he served on the President’s Council on Bioethics. He was president of The Krauthammer Foundation and chairman of Pro Musica Hebraica, an organization dedicated to the recovery and performance of lost classical Jewish music. He was also a member of the Chess Journalists of America.